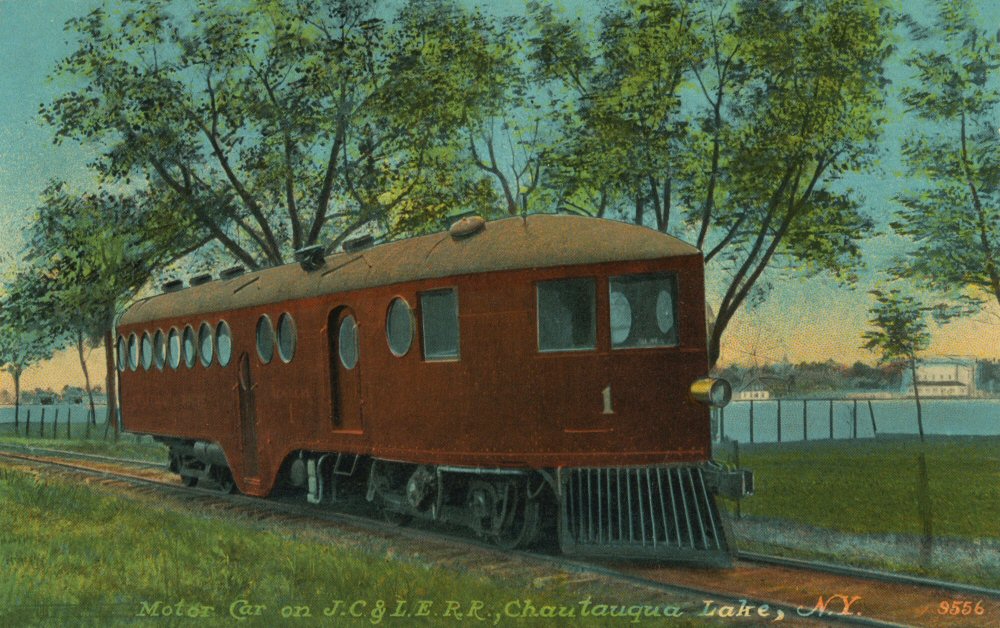 In this postcard, you can see Ferris Wheel right in front of the motor car window, across the lake.  This would be the one in Celoron Park, Chautauqua Lake, New York. 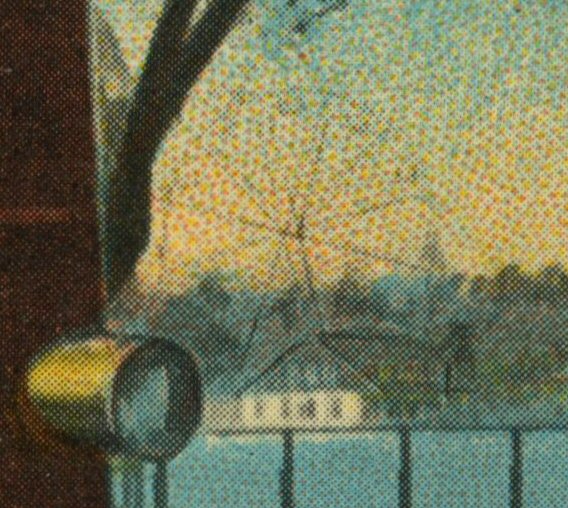 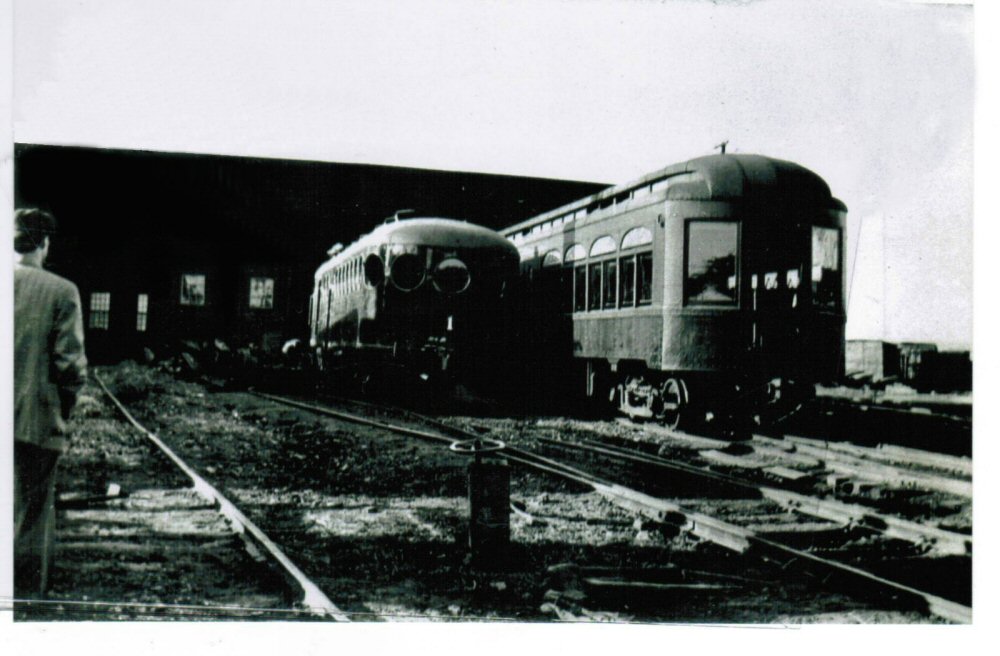 Here’s another view of the car in an unknown rail yard. 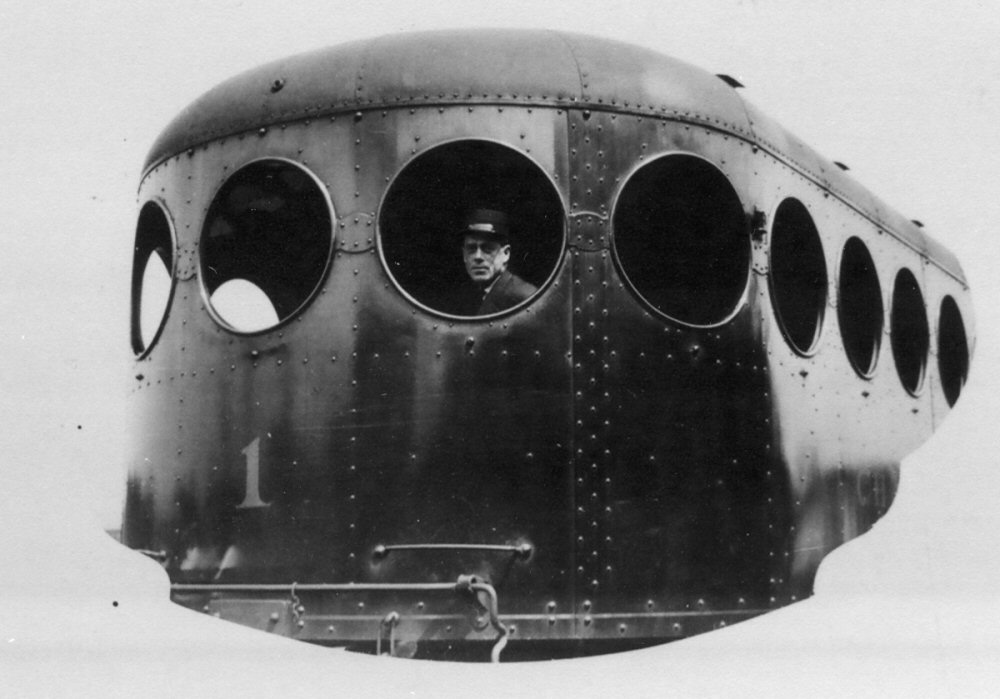 The History of the Jamestown, Chautauqua and Lake Erie Railway

The railroad began in 1881 as a single track between Mayville and Chautauqua, New York and was strictly called Mayville Extension Railroad.  By 1894 they had reorganized and were then named the Jamestown and Lake Erie and were running between Jamestown and Chautauqua.  Later in 1899, they became simply the Jamestown and Chautauqua Railroad.  In 1902 they reformed as the Jamestown, Chautauqua & Lake Erie Railroad which only ran from Mayville to Westfield, omitting Jamestown from the route even though it was still in the name as the track was not owned by the railroad.  In 1911, they would purchase the McKeen Car #1 and use it for only 2 years before reportedly selling it to a railroad in Missouri. The railroad would later become the Jamestown, Westfield & Northwestern in 1913, and would cease all operations in 1950.  The right of way is now mostly abandoned, rails in place, and the car has been lost to history.

The following is from the 23rd Annual report of the Board of Railroad Commissioners of the State of New York for 1905.

On September 6, 1905, I made an inspection of the Jamestown, Chautauqua and Lake Erie railway, and respectfully submit the following report: The Jamestown, Chautauqua and Lake Erie Railway, a single track railroad, extends from Jamestown on the line of the Meadville division of the Erie railroad, to Westfield, where it connects with the Lake Shore and Michigan railway, a distance of 31.25 miles. It has also a branch line which connects with the Western New York and Pennsylvania railroad at Mayville, and extends to Chautauqua, a distance of 2.68 miles, and has trackage rights over the Western New York and Pennsylvania railroad from Mayville to where a connection is made with the main line; a distance of 1.20 miles. This branch line is called Chautauqua branch, and is only used as a freight road. It owns another branch line known as the Falconer branch which connects with the main line near Jamestown and extends to Falconer, on the line of the Dunkirk, Allegheny Valley and Pittsburgh railroad, a distance of 3.46 miles; this branch road has not been in operation since the last inspection (May, 1903) and is now unfit for use; it cannot be put in operation again until the track and structure have been rebuilt.

Recommendations. That the cuts on the newer portion of the road be properly widened and sloped and ditches cleaned; the Howe truss bridge promptly replaced; neces sary repairs to trestles, open culverts and to trestle, open culvert and cattle pass floors (above referred to) be made as rapidly as possible; that inside guard rails be put on all the bridges and trestles; that worn rails be re placed; all the switch stands be equipped with lamps; all frog, guard rails and heels of switches be protected by foot-guards; targets be put on the stands to derailing switches; that derailing switches be put in the track of the Jamestown Street railway each side of the crossing at Jamestown, so arranged that the conductors must cross the track of the steam railroad to close them and hold them closed until the car passes, the derail to open automatically; that the brush, grass and weeds be cut and removed; the fences put in proper repair, and cattle guards with guard fences maintained at each boundary of all highways crossed. Chautauqua Branch. The Chautauqua branch is fairly level, has light curves, is very well graded and drained, has only small openings, for passage of water, all wooden structures in medium to fair repair, the ties same kind and about the same condition as the main line; the rail–60-pound steel—fairly good. This branch is only used to carry freight to and from the Assembly grounds at Chautauqua, trains only going over it about once a day in each direction, at slow speed, and is in suitable condition for that operation. Falconer Branch. The switch connecting with this branch has been taken out and the branch has not been in operation for a year or more. It is not in condition for use and cannot be operated unless very extensively repaired. A copy of this report was sent to the company with a letter making the recommendations those of this Board. The company replied that the items were being taken up in detail and most of the suggested improvements have already been made. (No. 41–1905.)

Electrification of the Jamestown, Chautauqua and Lake Erie Railroad, Includes notations of using Niagara Falls electricity to power parts of the line.

The Westfield, New York Train Station used for the Lake Shore and Michigan Southern Railroad as well as the J.C.&L.E.R.R. still exists.