Post #1. We will discuss all discoveries made, and work done to the car. So far, we’ve made a lot of discoveries, including the original flooring, all three layers, the original trim work around the windows, and the original wood veneer. Last photo shows what most of the steel is marked with in the car, “Carnegie” 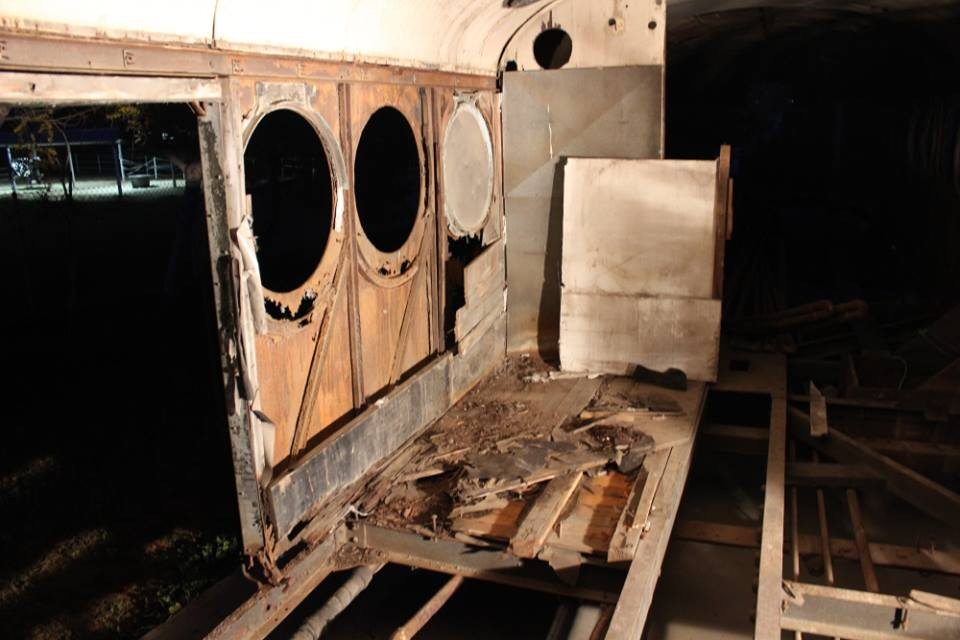 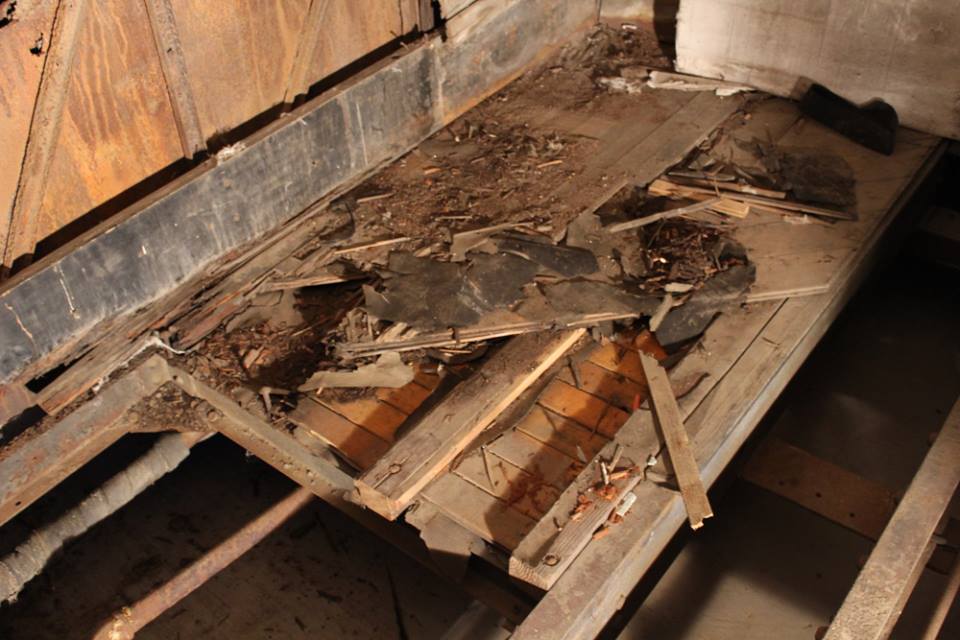 Bottom Layer is the clear wood near the bottom, Diagonal wood is a support wood for the top layer, which runs length wise in the car and is in the top of the image. We believe the three layers were used to help deafen the sound. 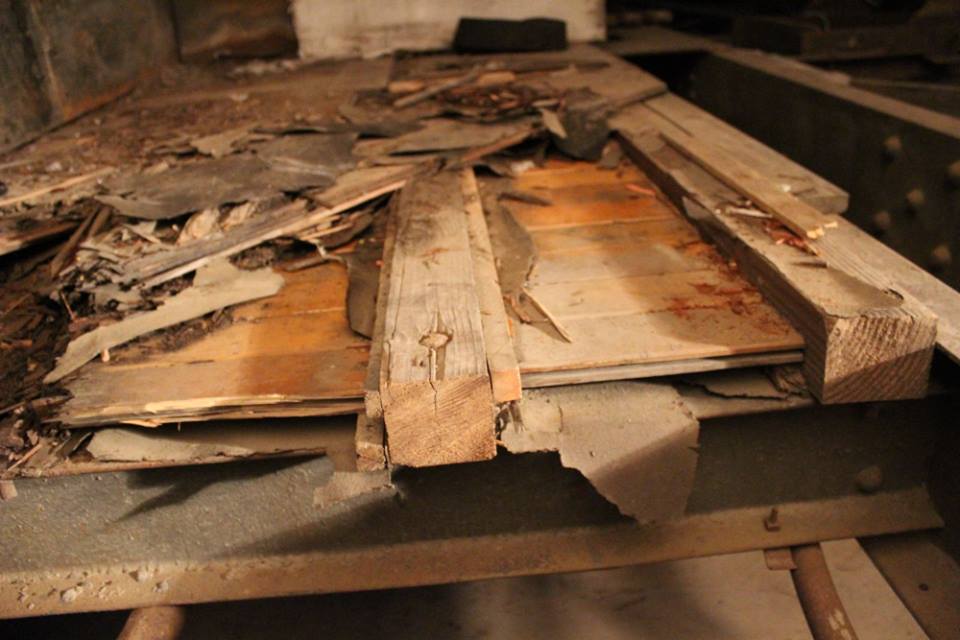 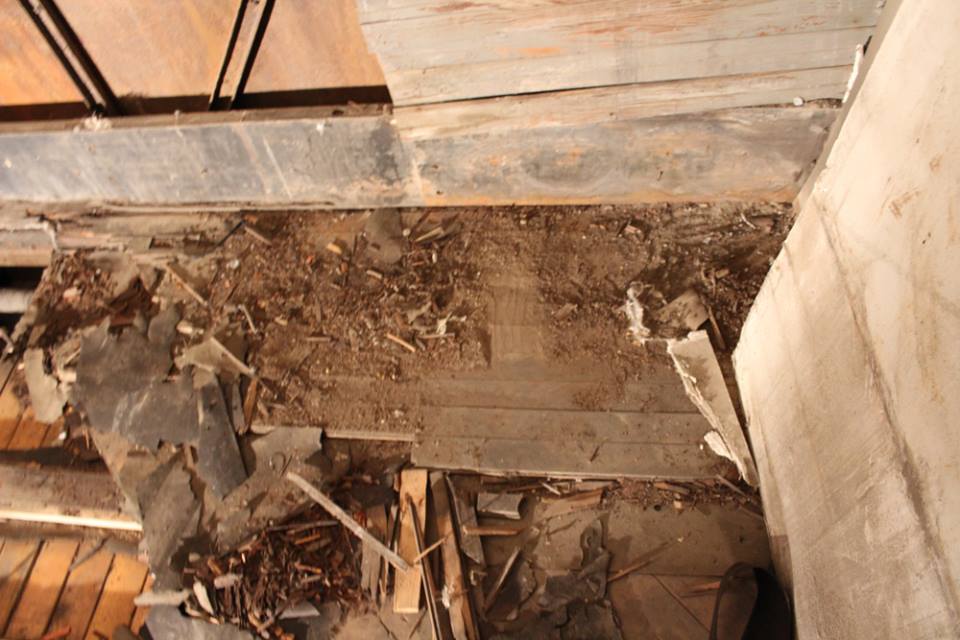 What appears to be the original wood floor. 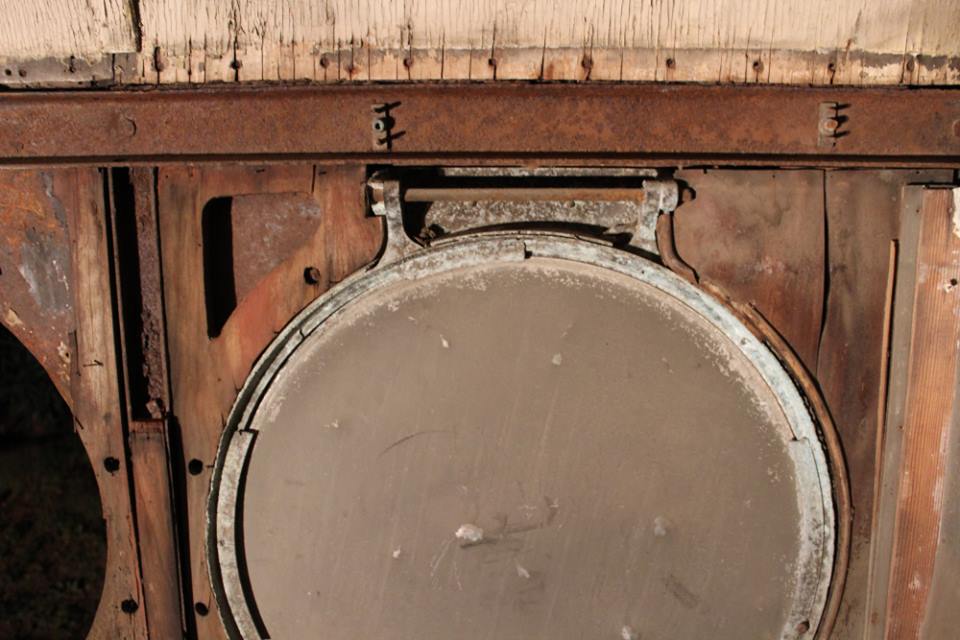 Left side shows the wood structure placed with each windows to help support the veneer, which can be seen on the right side. 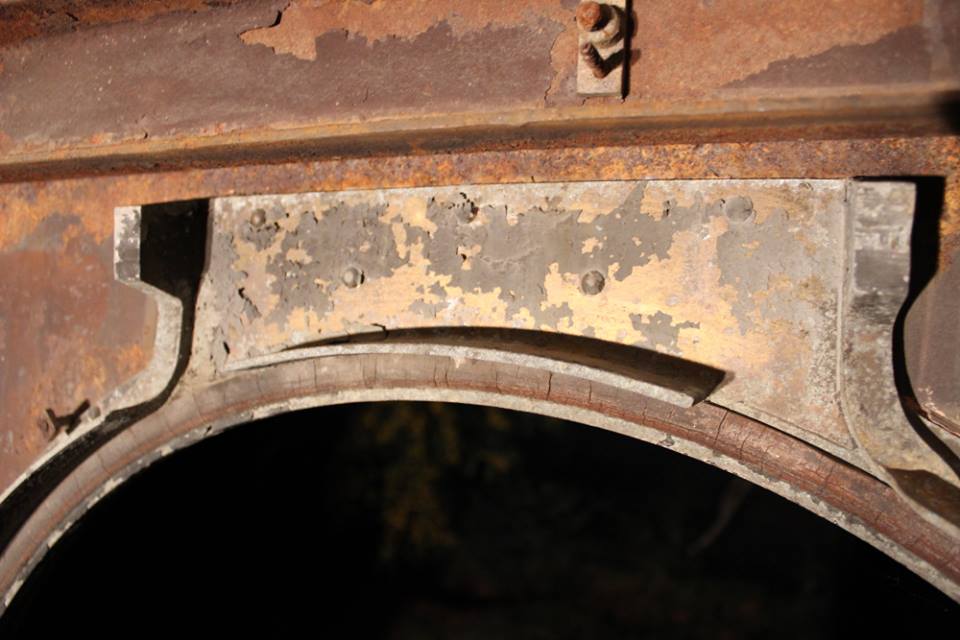 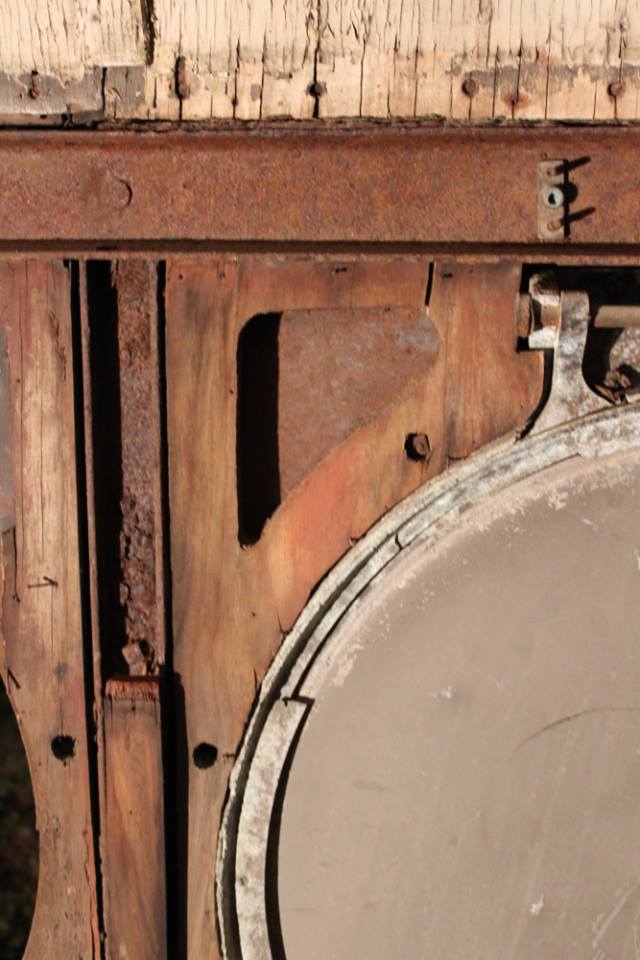 Wood support structure used to frame the window and support the wood veneer. 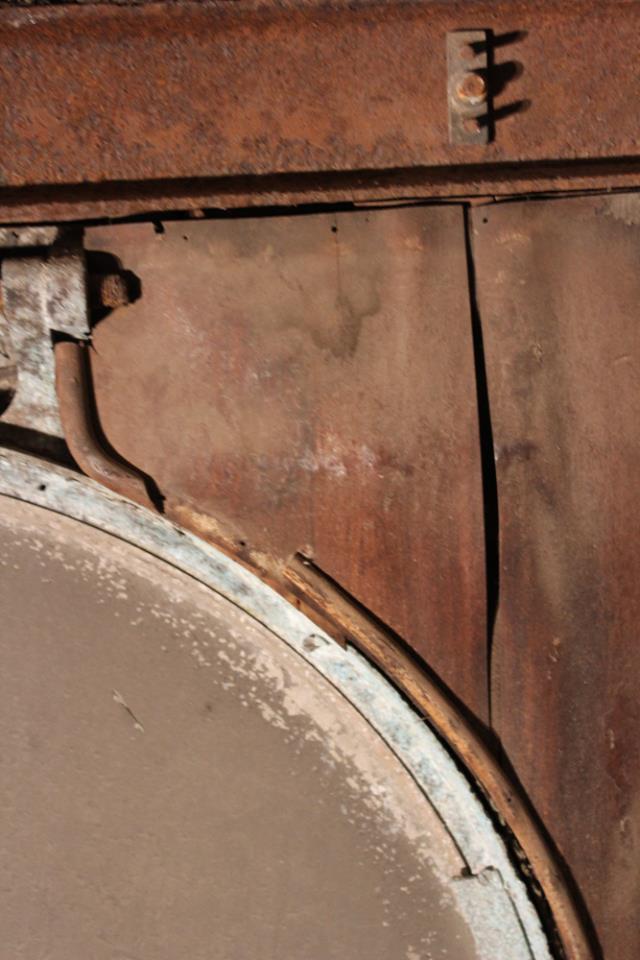 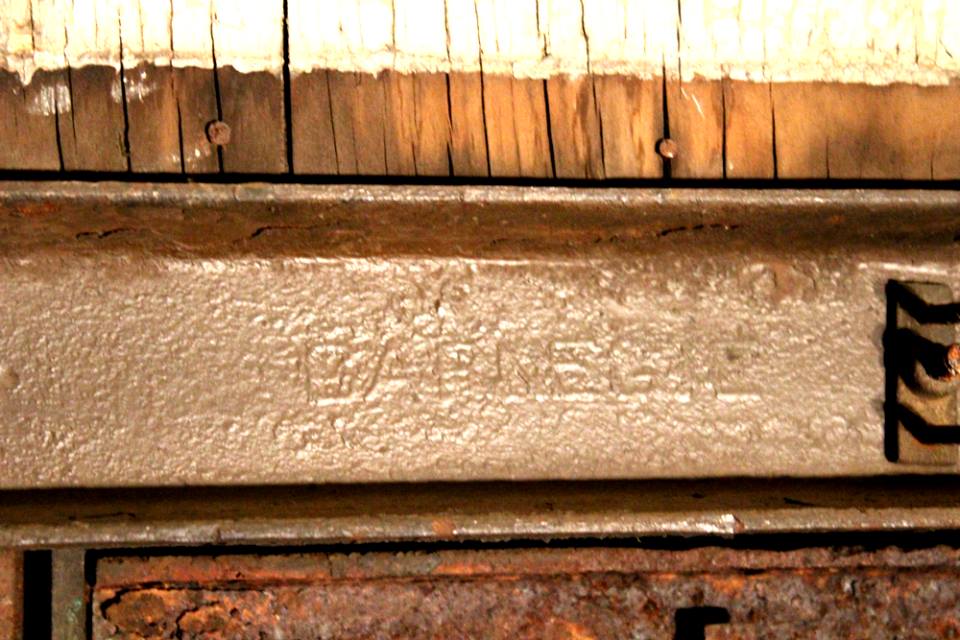 Post #2. We’ve been working on the car removing small factory parts and all non factory parts. The first two photos show the Water drains used on the radiator pipes inside the car. We are still determining whether or not they are original, though we believe they are, along with these valves. The next photo shows some of the trim work that would cover the gap between the window frame and the wood veneer, also holding the wood down to help prevent warping The next photos shows the color of the wood veneer, a very dark Mahogany color. Next is one of three window frame hooks that were on the inner frame of the window. When you wanted to open a window, you would unscrew this, then lift and latch the lock on the ceiling onto the ring shape made by this handle. An interesting design that was not perfect, many railroads asked the passengers to let the conductor latch the windows upwards to make sure the window wouldn’t come down on your head as you were riding along. Lastly, we removed the rear coupler box plates that were bolted in place by the Alaska Railroad. Once we took one of the two plates off, it revealed red primer we believe was to protect the frame work. 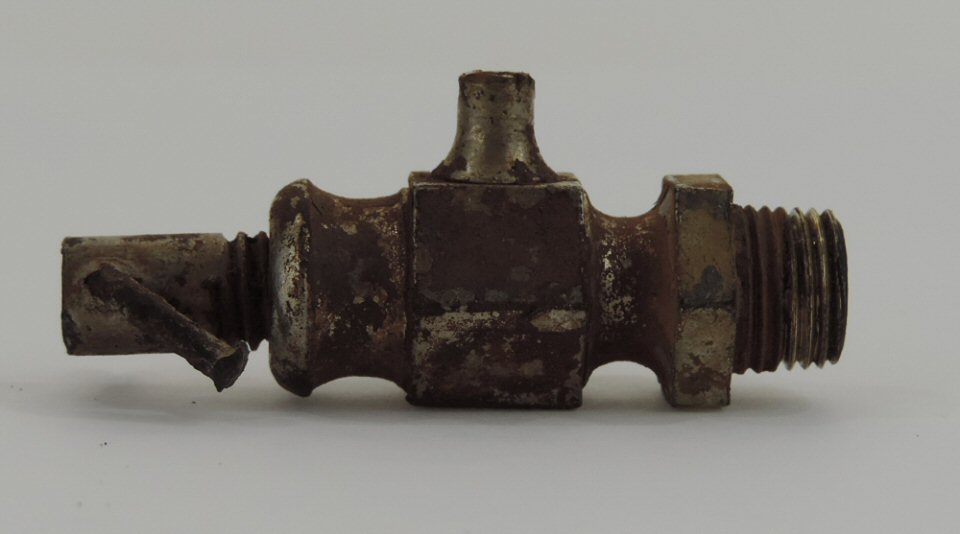 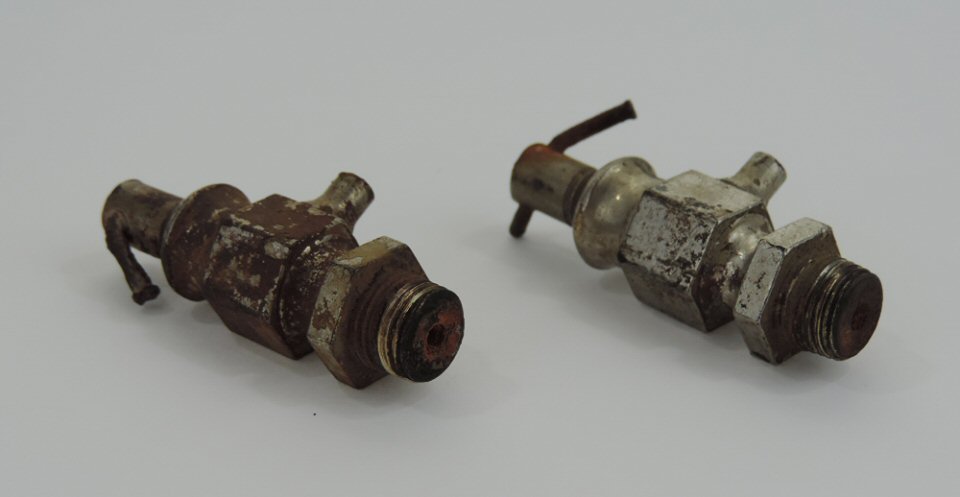 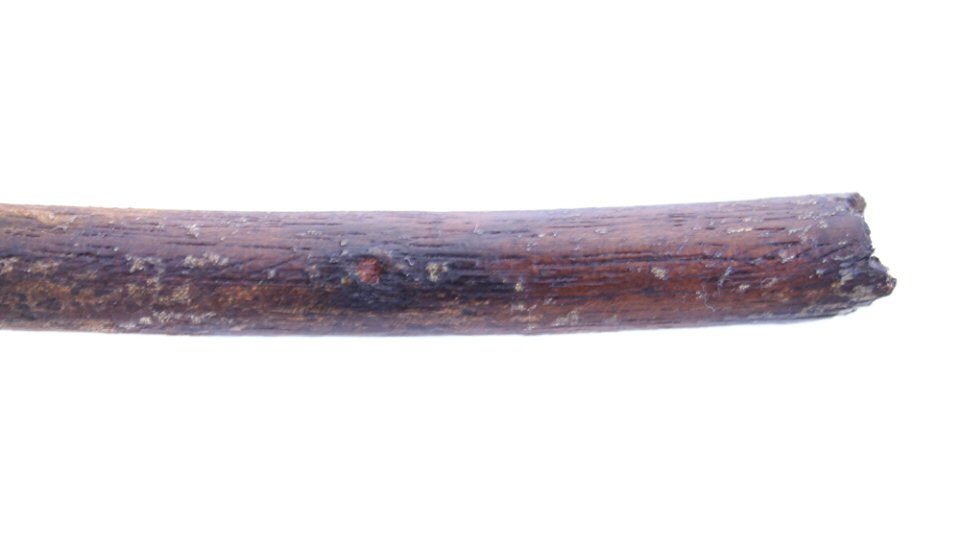 This is trim work for the window frame to hold the veneer down to the wall. 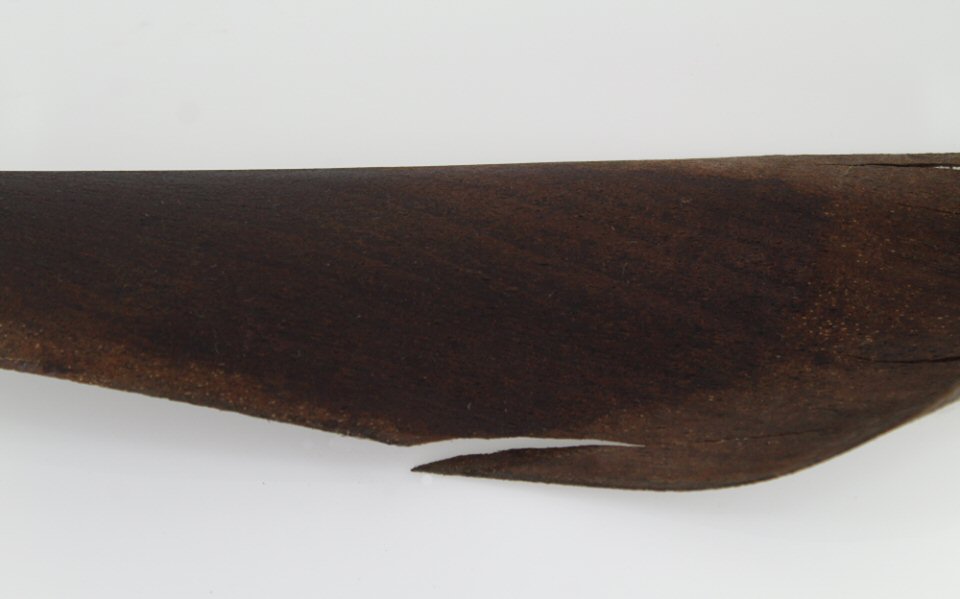 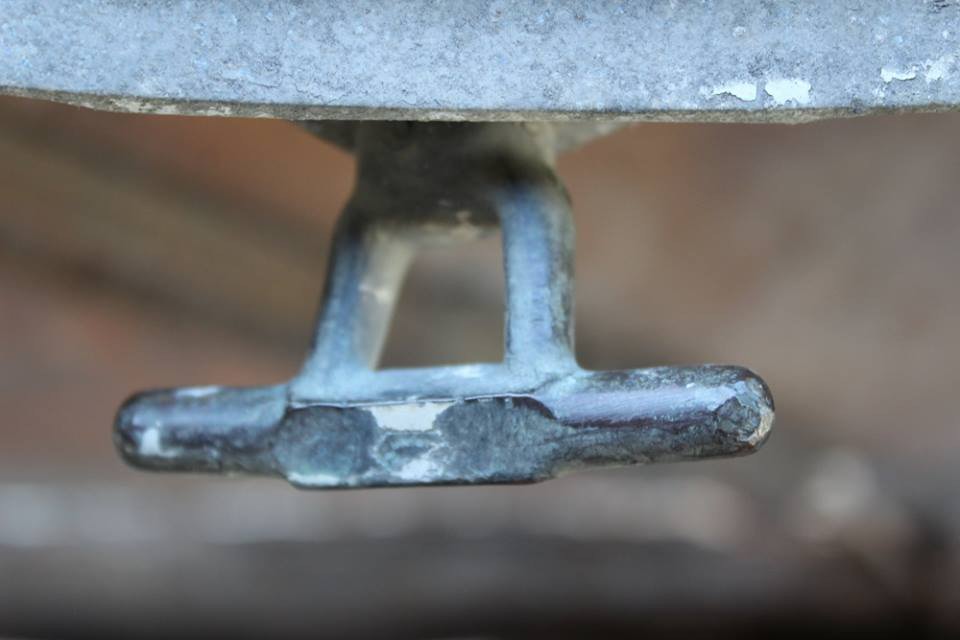 One of the hand brackets on the window frames in the car. 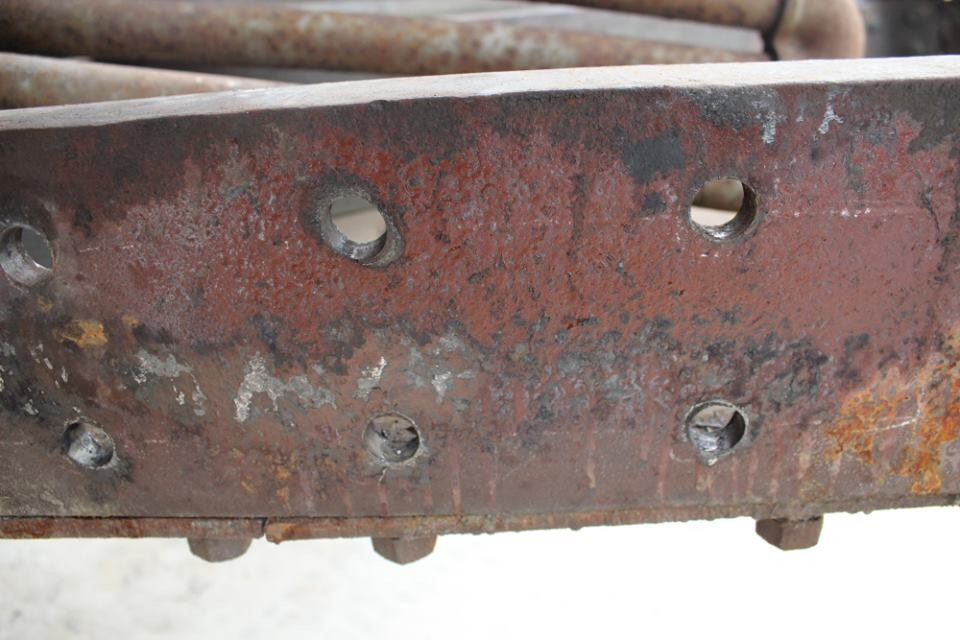 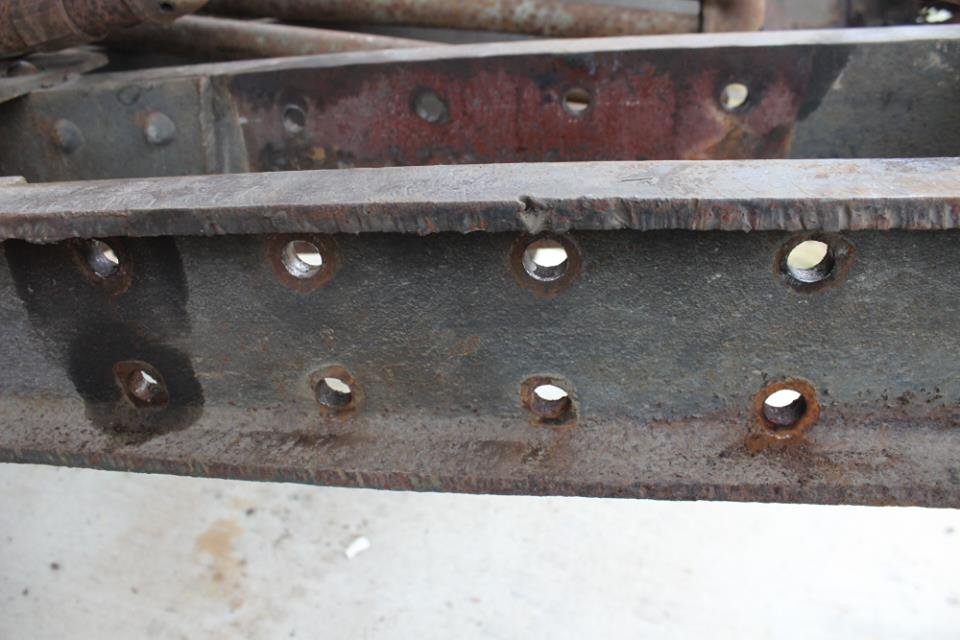 Where the two plates were for the rear coupler box.

Post #3: After we posted the Update on the restoration yesterday, Madison Kirkman made a discovery that we think is worthy of it’s own post. He was pulling off the hand rails that were put on the car with the addition of the baggage doors between 1915 and 1924. Thankfully, the car was still in the original paint scheme at the time of the addition, and the hand rail covered over part of the red and the gold leaf, which is real gold, and not yellow paint like the Virginia and Truckee #22. We have two photos of early McKeen Cars that show the gold stripes, one being of the Cuyamaca. 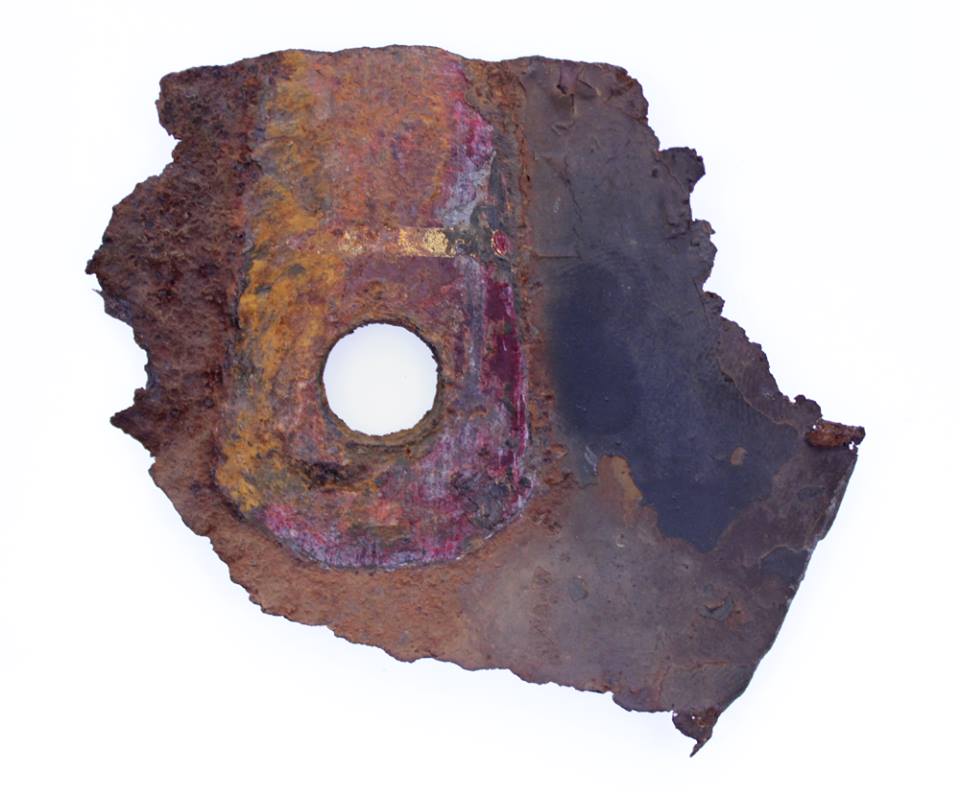 This was the steel skin at the bottom of the starboard front Baggage Door hand rail. I cut off the metal from the rest of the skin that was also deteriorating, and the skin is only about 1/64 of an inch thick, and was about 1/8″ thick when built. That shows how close this was to complete deterioration. 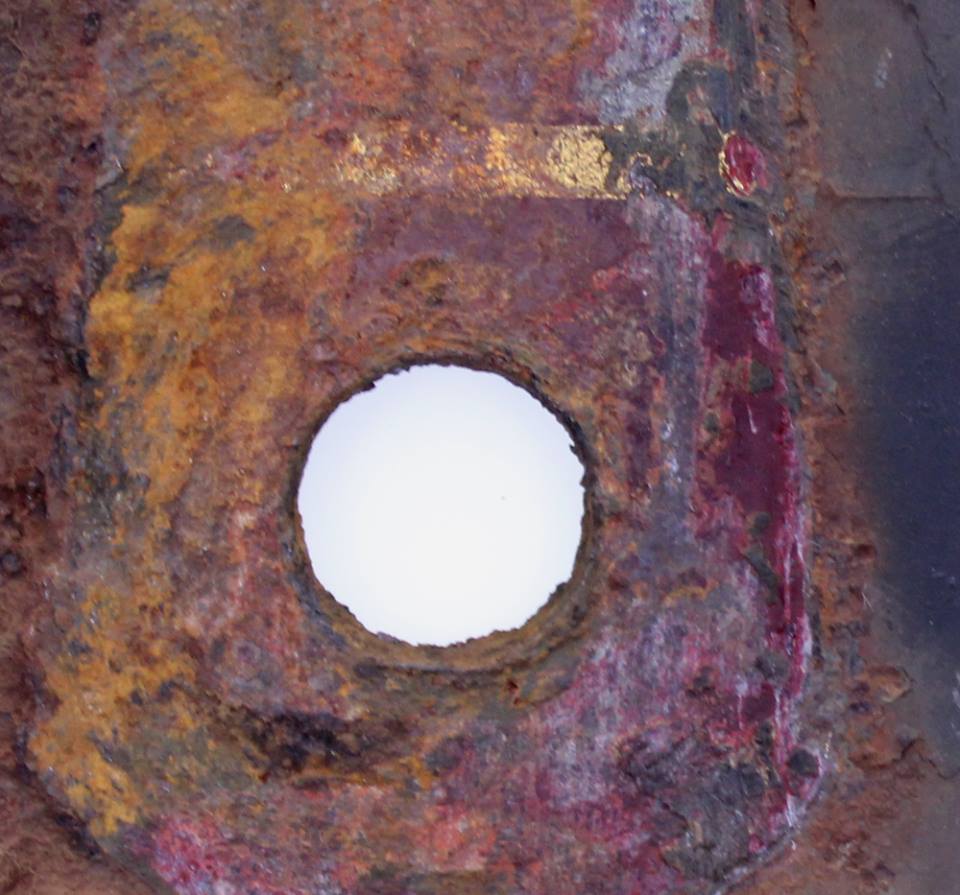 Close up of the 1/8 Inch thick gold leaf stripe and the color sample. We are going to keep this piece safe as this may be the only original paint left on the car. 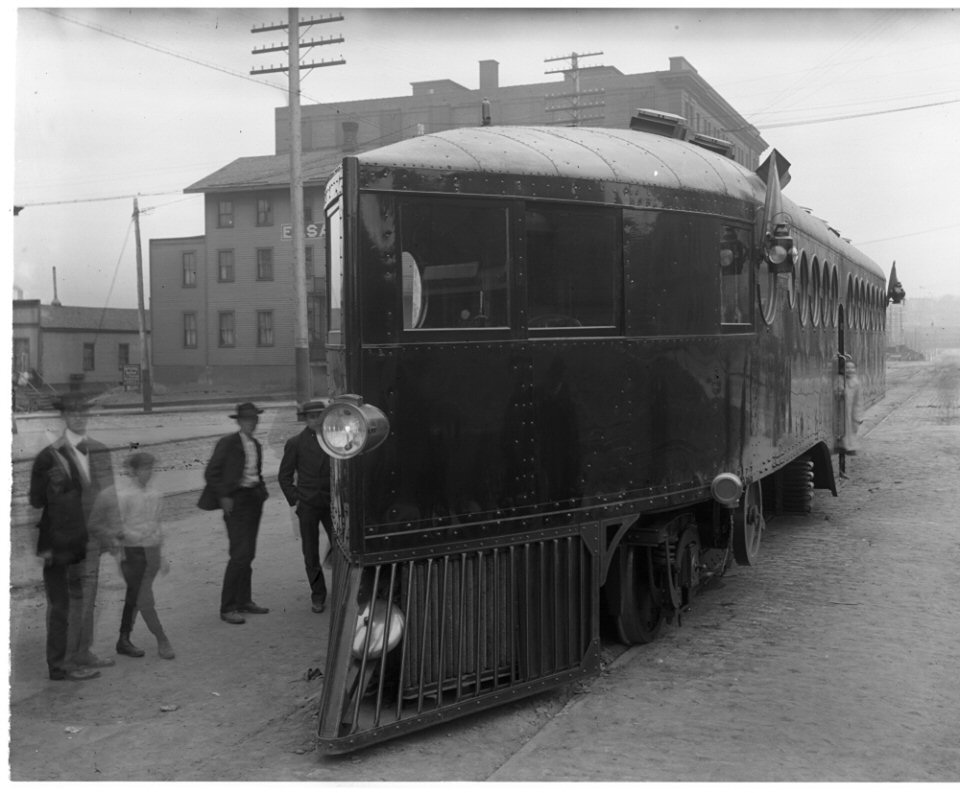 Here is a photo of Union Pacific #10 – Durham Museum.

This shows the main 1/2″ gold stripe, but also the faint line above is the line you see on that steel piece, the smaller 1/8inch stripe. 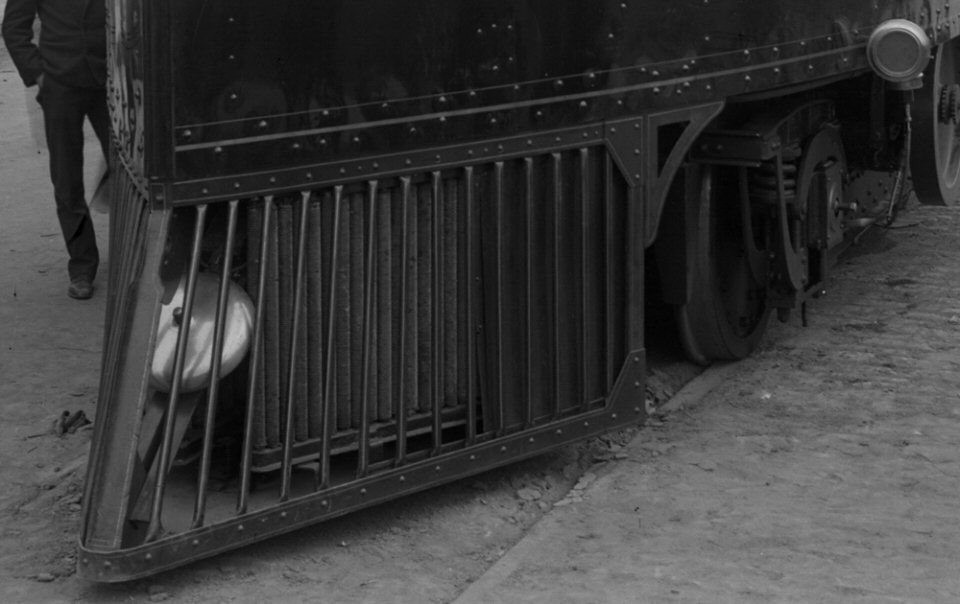 You can not only see the two stripes on the car body, but also that the car had gold stripes on the cow catcher as well. This will be replicated on the restored McKeen Car. 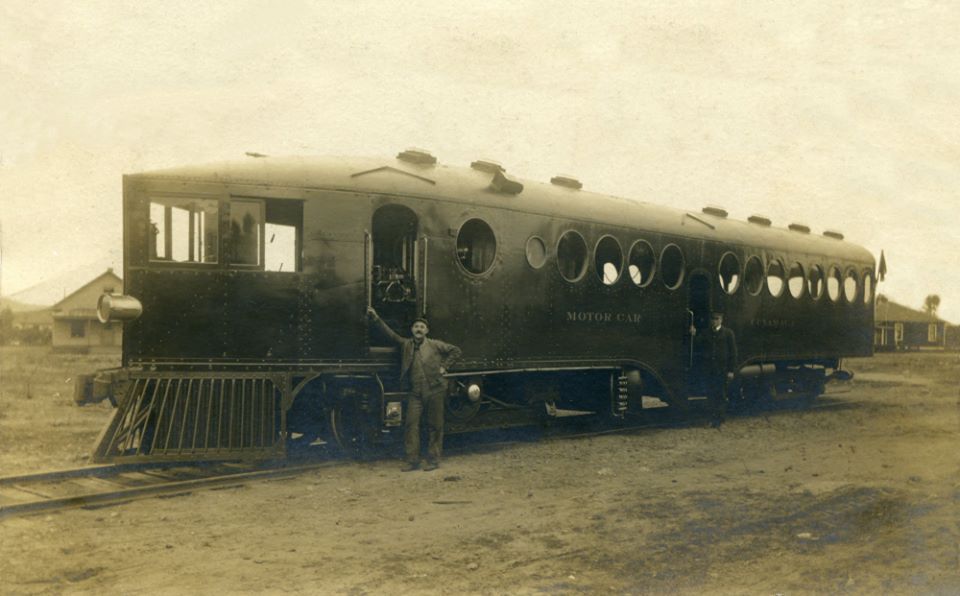 This photo is a nice side view of the car in it’s original color, and we can tell because the original gold striping is still visible. Let’s zoom in…… 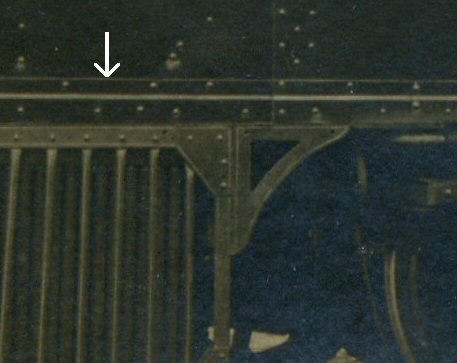 The arrow shows the smaller 1/8″ stripe, and then below the 1/2″. This also shows that there was gold striping on the Cuyamaca’s cow catcher.